The latest big number is 2. 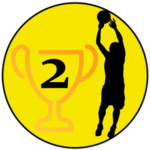 The Division 2 title has been claimed for the 2019/2020 Season with the second placed Beavers coming away with the win over the first placed Brownies. This win secures the Beavers a repeat title having previously taken out the 2018/2019 season. This is also marks the 4th championship win for the Beavers and second back to back championship, having previously taken out the 2012/2013 season and 2013/2014 season.

The 2019/2020 season ended on a weird note with the grand final only having one game played due to the rapid spread of COVID-19 shutting down all organised sports. A decision that the CPL did not take lightly.

The Beavers had a consistent season with 20 wins and 10 losses which put them second for the season. The Beavers also didn’t lose a game during the playoffs and finals.

13 players wore the Beavers uniform for the 2019/2020 Season with eight being regular players and five fill-ins. During the finals the Beavers used eight players. Those 13 players combined for 210 games played.

Congratulations to the Beavers for taking out the championship this season. Good luck for next season to defend your title and go for the three peat.