The latest big number is 1. 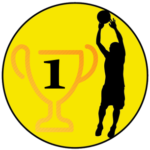 The Division 1 title has been claimed for the 2019/2020 Season, with the third placed Pork Swords coming away with the championship over the first placed Hawks.

The 2019/2020 Division 1 season ended on a peculiar note, with the grand final sadly wrapping up after only having one game played, due to the rapid spread of COVID-19 shutting down all organised sports. A decision that the CPL did not take lightly.

The Pork Swords had a good season making a hard run towards the finals towards the end of the regular season. The Swords finished third for the season with 17 wins and 13 losses.

17 players represented the Swords this season with nine regular players and eight fill-ins. During the finals, the Pork Swords used eight players. Those 17 players combined for 187 games played.

The Pork Swords were not without fault during the season – recording 257 fouls, 5 Tech Fouls and 2 Unsportsmanlike Fouls. During the finals, the Pork Swords recorded 31 fouls.

A very big congratulations to the Pork Swords for taking out the championship this season. Best of luck defending your title next season (whenever that may be).